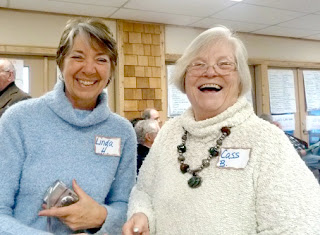 On Monday June 6th, Quimper Grange will be hosting Linda Herzog and a team of Quilcene Conversations activists who will be sharing the strategies behind their recent successes in rejuvenating the town of Quilcene.  Linda and her partners will cover the beginnings of Quilcene Conversations, how they created a comfortable environment for neighbors to meet, identified their assets, needs, opportunities and possible solutions, selected the first 5 or 6 projects from 150 great ideas, handed the reins to energetic natural leaders, created an effective communication system and have now formed a community nonprofit organization named “Count Me In for Quilcene”. 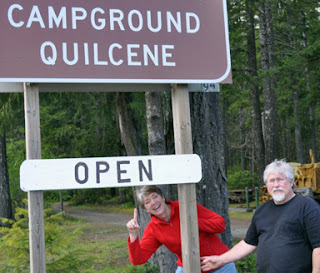 In the short six months that Quilcene Conversations has been active, the group has unleashed a torrent of community energy and has made remarkable strides toward revitalizing their town with no resources from outside their community.
Herzog says that audience members are invited to challenge her and her team on their concepts and processes.  “Questions and responses are likely to enrich everyone’s thinking, and may spark new ideas for grass-roots community-building in other places,” she says.
Linda Herzog, who was born and raised in the Washington DC area and retired in 2009 as interim City Manager of Sequim, has had a long career in public service in both the local and federal government levels.  She first came to Seattle in 1970; moved away and returned to the Pacific Northwest three times and is now permanently settled in Quilcene. 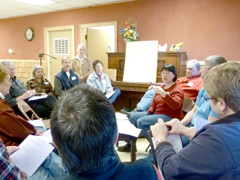 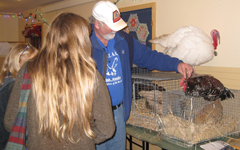 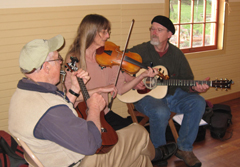 There was a virtual barnyard chorus of clucks, gobbles and peeps in the background as hens, chicks, roosters and turkeys peered out from cages behind Jean Ball last May 2nd while she shared the joys and peculiarities of living with chickens and turkeys with an animated audience of 70 plus people. The first question of the evening had to do with chicken predators.  Jean recommended five foot high or more, two by four, no-climb horse fence with electric hot wire for the ground predators and commercial fishing net for the flying ones, but says a dog is the best protection.  Her favorites are the Italian Maremma and the Great Pyrenees-Newfoundland blend—definitely not apartment dogs weighing 160lbs each and eating a whole chicken or rabbit raw every day.  Did you know chickens can’t see at night? That’s why they go to bed early.  Lock them in at night together and they won’t need heat either, even if it is cold.  Chicks, of course will need supplemental heat.  Jean doesn’t tolerate a bad rooster, whose real duty is defend the flock and be respectful with the hens.  She presented her favorite friendly rooster who seemed almost to purr in her arms as she stroked him.  One attendee who keeps chickens brought chicken “saddles” that she makes and sells to people to protect the hens.  Properly bred chickens, however, should have friendly courtship rituals.  Jean showed an amusing item--chicken diapers that someone had presented to her for the use of house chickens.  And indeed someone in the audience had a house chicken that wore diapers.  Carpenter Jeff Stoneman was present demonstrating his custom chicken coop.  There was background music during the beginning social half hour played by George Yount, David Thielk and Kim Thompson who sneaked in a “Turkey in the Straw”.  For chicken/turkey information, Jean Bell can be reached year round at gnarleydogfarm@gmail.com.  For portable chicken coop information Jeff Stoneman can be reached at 774-0686 or jcstoneman@gmail.com. For a fun and interesting read, check out John Barr’s Adventures in Chickens at http://grangegarden.blogspot.com/
Our Historian Says. . . . .
The Sick Committee: Quimper Grangers Care…
Grange history usually focuses on big stuff like fighting monopolies, speaking out for women’s suffrage, campaigning for public power or even jumping on the prohibition bandwagon, but little is mentioned about the kindness and caring that has been a part of the social fabric of local Granges from the very start. In a traditional Grange one of the entries that was pre-printed in official Grange minutes books  reads: “ The Committee on Relief reported the following members were sick or in distress”. Quimper Grange called this the “Sick Committee” before pre-printed minutes books were used and this committee was charged with reporting on ailments and injuries of members as well as buying plants or sending cards in a kindly gesture of support.
Through the years many members of Quimper Grange have died and as has been tradition a ritual draping of the charter has marked their passing. Black crepe was hung over the charter at the first meeting following a member’s death and remained draped for 30 days. The charter is the document that establishes that the organization is officially a Grange of the Order of the Patrons of Husbandry. This document was framed and hung on the wall.  Marla Streator
Posted by Quimper Grange at 11:56 AM