APRIL IS GRANGE MONTH
We who keep the doors open at Quimper Grange are all volunteers. Every event that you see in our monthly newsletter came into being due to volunteer effort: our dances, our educational programs, our "House Concerts", and workshops. In addition Quimper Grange has promoted community service through collaborative efforts such as with Food Bank Farm and Gardens of Jefferson County and the organizers of the annual Plant and Seed Exchange. Volunteers too maintain our community hall and grounds as well as hall rental management. It's April, don't forget to thank a hard working Quimper Granger!   Marla Streator, Quimper Grange president

Due to unforeseen circumstances Pam Johnston and Jim Ketterman will not be able to lead this month's Old Time Jam.
Fortunately for us a fine bay area fiddler, Bobbi Shearn Nikles has just moved to Port Townsend and will be able to fill in for Pam and Jim. She will start by teaching the G tune, Josie Girl, in standard tuning on fiddles and plans to play Old Yeller Dog and go from there. 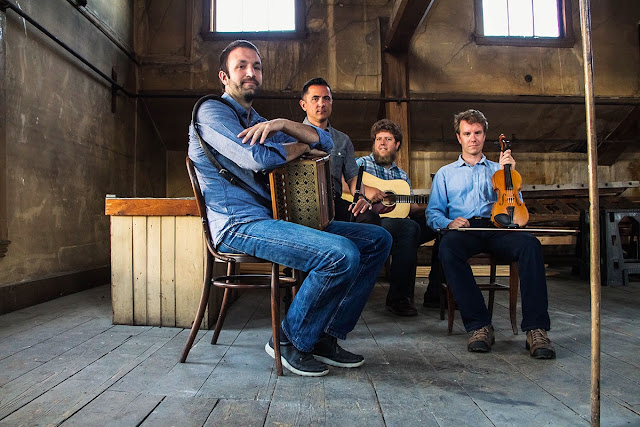 "One of those rare bands that are ingenious, driving, thoughtful and yet have great respect for the tradition.”  John Doyle

The Press Gang, a traditional Irish and Celtic four-piece based in Portland, Maine, will be playing a concert at the Quimper Grange, 1219 Corona St., on Tuesday, April 10 from 7 to 9 pm.
The band features Hanz Araki on flute and vocals, Chris “Junior” Stevens on accordion and concertina, Owen Marshall on guitar and bouzouki, Alden Robinson on fiddle.
Award-winning singer and flute player Hanz Araki has been a prominent figure in the Irish music community for more than two decades. He has released 11 albums, and toured internationally. Christian “Junior” Stevens is an influential member of the Irish Traditional Music community, and is an in-demand performer and teacher on concertina and button accordion. Alden Robinson learned the fiddle growing up in coastal Maine, and furthered his education in traditional music at University College, Co. Cork in Ireland. Bouzouki and guitar player Owen Marshall is one of the most highly sought-after accompanist in Irish and Old-Time genres.
Doors open at 6:30
Suggested donation at the door is $15 to $20.

More information about the Press Gang, including sound and video clips, is on their website at www.pressgangmusic.com.