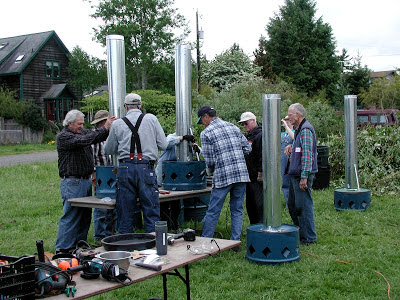 On an overcast Saturday around 20 participants gathered outside Quimper Grange for the first ever boichar stove building workshop on the Olympic Peninsula. Sparks flew as barrels were cut and drilled transforming them into biochar “ovens”. Reasons for attending ranged from learning how to make large quantities of biochar, to wanting to experiment with biochar as a soil amendment for orchards and gardens and farms, to interest in integrated systems design where heat produced from biochar production would serve a function like heat a greenhouse.

Five stoves were built during the 7 hour workshop using Norm Baker’s recent design innovation that reduces smoke to zero when the stove starts burning gasses. Everyone had the opportunity to use all of the tools and try their hand at any aspect of stove building they wished. 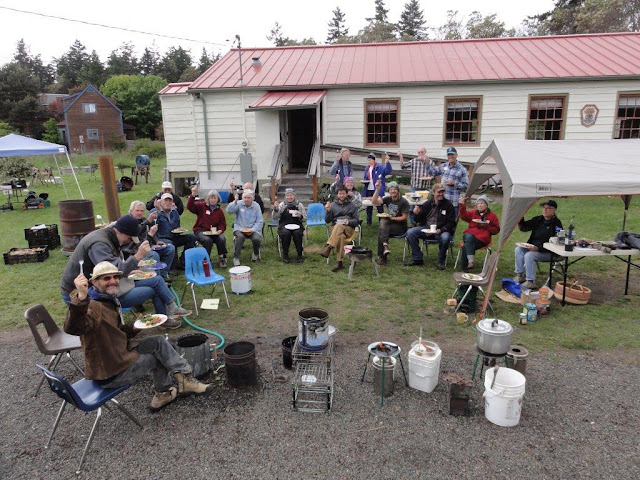 At the mid-day break there was a potluck lunch. Delicious food was cooked on a variety of gasifier stoves, including a big vegetarian chili, to add to potluck contributions.
If you were unable to attend this workshop Francesco Tortorici the workshop organizer spoke of doing another one in the future. So keep your eyes peeled for announcements.

On behalf of myself and all the workshop participants thank you Francesco and all of your “biocharistas” for a valuable, enjoyable and well organized stove building experience.
Marla Streator


JUNE 3rd - BUILDING NATURALLY ON THE QUIMPER PENINSULA
Want to play in the mud and build a house at the same time? Rainshadow Natural Builders’ Guild (RNBG) will show you how during a Quimper Grange presentation, Monday, June 3, 7:30 PM, 1219 Corona St. Refreshments are served at 7PM.

Attendees will learn about the potential for natural building in our community with RNBG co-founders Micah Van Lelyveld and Rachel Williams. The presentation will address the benefits of building with natural materials including wood, straw and earth, techniques appropriate to our region, and upcoming opportunities to learn more and get involved. The presentation will be followed by a community conversation and Q &A with experienced natural builders. Admission is by donation.

Van Lelyveld became intrigued with natural building while helping on a friend’s project in 2009. He followed that introduction with a six-month "Tour de Sustainability" bike trip down the west coast and returned to Port Townsend to start RNBG.  Williams co-created RNBG as an applied learning project while earning her MBA in Sustainable Business Systems from Bainbridge Graduate Institute. She is the former construction manager for Habitat for Humanity of East Jefferson County, where she helped implement energy-efficient building practices. 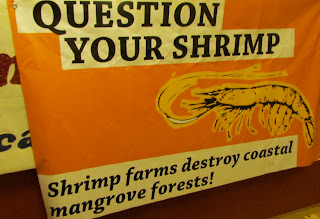 For most of us who live on the Olympic Peninsula the consequences of warm water shrimp farming have never crossed our minds. However for those of us who attended Alfredo Quarto’s talk at Quimper Grange on May 6th the lure of cheap shrimp imported from other countries has most likely lost its appeal. Speaking for myself, the idea of eating shrimp that have been raised with the use of antibiotics and pesticides is only one of many “yuck” factors he spoke about. It is even more repellant to think that that millions of acres of costal forest have been destroyed by bulldozing mangroves which provide rich habitat for 70% of all tropical fish. What is worse shrimp farms are only viable for a small number of years before they become so polluted they have to be abandoned. As long as there is demand for cheap shrimp another swath of mangrove forest will be bulldozed for another shrimp farm.
Fortunately we consumers have the power to turn this situation around, Alfredo says, by “questioning our shrimp” and not buying imported shrimp. Our local Spot Prawns are an example of "good" shrimp to buy as well as Coon Stripe Prawn and Oregon Pink Shrimp. Decreasing demand is the key to stopping devastating shrimp farming practices.
For more information go to http://mangroveactionproject.org/
We thank Alfredo Quarto and his colleague Ira Stollack for coming from Port Angeles to speak on a subject that people who care about earth’s precious ecosystems need know about.
Marla Streator

SQUARE DANCES WILL RETURN IN OCT 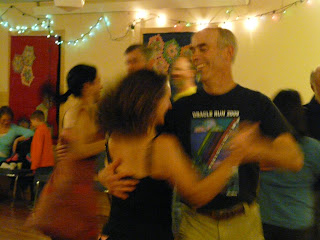 It was only a couple of years ago that Quimper Grange member Dave Theilk proposed that Quimper Grange sponsor a monthly square dance. He had organized a few 5th Saturday dances at the hall prior to the first Grange sponsored Saturday Square Dance. Over the past couple of years there has been an influx of youthful energy at the dances: Marine Science Center interns, boatyard guys, NOSC volunteers and Young Farmers keep the dances rolling to the last waltz. Thank you Dave for all you've done to organize these dances from finding bands and callers to advertising and running the sound equipment.

Posted by illusionsofbanjar at 9:17 PM