Dave Thielk will be leading the tunes this month and will be playing in the key of D and the key of A (fiddle tuned AEAE).  He will start by teaching  Jack Wilson, a John Salyer tune. Dave has been dancing squares, and contras since 1976, when he moved to Seattle and immersed himself in the now infamous dance scene led by stalwarts such as the Mudflap Ramblers, and Sandy Bradley.  Shortly afterward, Dave started playing back up guitar, then banjo, and more recently fiddle.  Dave approaches the fiddle from the dance perspective, but also goes back to original source material before making tunes his own.  He will be playing tunes from John Salyer, Ernie Carpenter, Melvin Wine, Brad Leftwich, Bruce Molsky, Tommy Jarrel, James Bryan and others. Suggested donation $1-$2 to help pay to heat the hall. Snacks to share appreciated.

Hoot and Holler (Amy Alvey on fiddle, and Mark Kiliansky on guitar) are coming to Quimper Grange to play the February 11th square dance. Local caller Dave Thielk will be rapping out the dance moves. Hoot and Holler are on a West Coast tour, and we were able to schedule them for both our monthly square dance and a house concert (see below). These guys have energy and drive, and put a really nice edge on old time dance music. It will be a rocking good dance.

Dancing starts at 8 PM but you can come at 7 and jam with the band! All dances are taught. All ages and experience levels are invited. Families,
tribes, couples, and lone coyotes are all welcome. Cost is $6 for adults; 16 and under are free. 1219 Corona. Bring a personal water bottle, please, and optional snacks to share with other dancers. See you there!


Bi-costal singer-songwriters and instrumentalists Mark Kilianski and Amy Alvey, better known as Hoot and Holler, are kicking off 2017 by releasing a brand new album “Reasons to Run”, and embarking on their third annual west coast tour. That tour includes a stop in Port Townsend, playing for a dance on February 11th, and performing a house concert on February 12th from 3:00 PM - 5:00 PM.

Amy and Mark present a hearty dose of traditional songs and tunes, with a contemporary edge, on fiddle, guitar, and banjo as well as original songs and compositions. Their songwriting evokes the
feeling of a cross country road trip, through the swamps of Louisiana and the deserts of New Mexico.

Amy and Mark, Berklee College of Music grads, are debuting brand new material from their upcoming album, "Reasons to Run," in addition to previous releases, “Nothing If Not Young,” and “Is This Goodbye.” The performance will be spring-loaded with rare energy and exceptional musicality as they unleash their best, and freshest works. 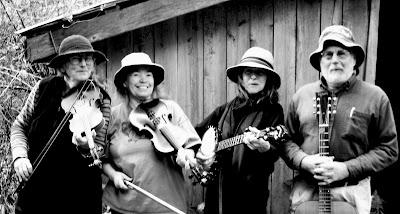 The third Saturday Contra this month will be on February 18th and features WILD PHIL AND THE
BUFFALO GALS -- an evening of toe tapping fun for beginners and experienced alike. Calling the dances will be perennial favorite: Sherry Nevins. Come at 7:30 with friends and partners (or without) and enjoy ‘til 11. Admission will be $6 for adults with no charge for those 16 and under. For more details call Tinker at 379-2882. 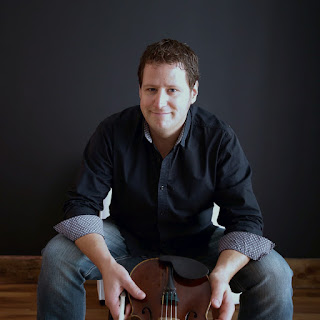 A veteran of The Festival of American Fiddle tunes, Andre last played to a sold out house in Port Townsend with his band, De Temps Antan in 2011. In this solo performance, Andre will share his love for the traditional music of Quebec bringing this exuberant music to life with his fiddling, singing and foot percussion.

Born and raised in Quebec’s Monteregie region, Andre picked up the fiddle at the early age of nine. With his brother, Rejean, he formed the band Les Freres Brunet with whom he recorded several CD’s and toured extensively. In 1997 Andre joined the Quebecois supergroup, La Bottine Souriante and went on to tour more than 15 countries with them over the next 10 years. After his tenure with La Bottine, Andre and two other La Bottine alumni went on to form his current band, De Temps Antan.

Since 2008 Andre has been involved with Camp de Violon Traditionnel Quebecois de Lanaudiere which is a fiddle camp based on learning and development of the fiddle repertoire in Quebecois traditional music. For any aspiring Quebecois fiddlers in town, Andre will be putting on a fiddle workshop from 3:00-4:30 on the afternoon of the concert.

The concert and workshop will be held at the Quimper Grange Hall, 1219 Corona St., Port Townsend. Suggested donation is $15-$25 at the door for the concert and $15 for the workshop. For more information go to    www.andrebrunet.com


Fundraiser for the Floor-Not too Late to Donate

Our fundraiser for the floor was held on January 21st, and as you may have noticed, there was a lot going on that day. The turnout for the dance was pretty small and we didn't meet our goal of covering
the cost of refinishing our well worn dance floor. The floor cannot be sanded again because it has been sanded down to exposed nails and if it is worn down to bare wood it will have to be replaced. We would like to avoid that expense and preserve the character of our treasured dance floor. If you would like to contribute to preserving our floor. Send a check to Quimper Grange, PO Box 1844, Port Townsend 98368
Thank you Airstream Traveler for playing and Eric Curl for calling, as well as Dave Thielk and Jo Yount for organizing our fundraiser event!


Get Ready for the 6th Annual Plant and Seed Exchange! 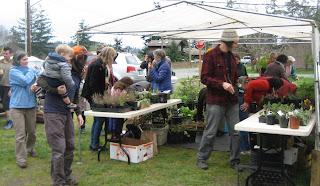 Posted by illusionsofbanjar at 9:40 AM